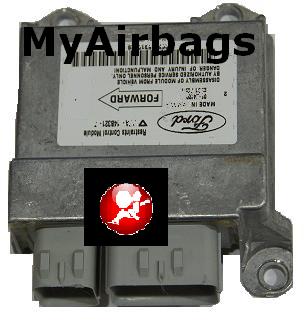 SKU: INV4598
Good tested airbag computer modules.
Compare part numbers to your original part, to ensure that this part will work for you

Out of stock
If your vehicle was in an accident, you can send your airbag control module to us for reset.
This will save you hundreds of dollars and also if you send your original module for reset then no additional trip to the dealer needed for VIN programming, since this is the original module and it is already programmed to your vehicle (Click here for more info)
Add to cart

Please compare the part numbers of your original part to this replacement airbag control moduleIf the part numbers do no match, it is unlikely that the airbag module will work in the vehicle.Once the replacement airbag module has been correctly installed in the vehicle the airbag light may still turn on.Again, for the reasons detailed above, you need to verify that you have followed the correct steps and that other parts were not from a flood damaged vehicle.If you have done everything else successfully, the airbag module may need to be reprogrammed for the specific VIN of your car by that manufacturers dealership.This is why we always recommend that you send in your original airbag control module from your vehicle. Each module is coded for the VIN of the vehicle it is in.

Send for Reset or Buy One?

Will this part work for me?

Warranty covers the repair of the part for one full year.

If the repair fails within a year, we will repair the part again. In the rare occasion that the item is not repairable, we will either replace the circuit board entirely or refund the cost of the repair, at our discretion.

This warranty is non-transferable and applies to the original purchaser only.